The situation of children in Central Asia

Violence against children at home is commonplace across the region, with around half of all children in Central Asian countries experiencing violent discipline. UNICEF in Kazakhstan found that some 75 percent of adults support corporal punishment to discipline and control children, while 67 percent use violence against their own children.
Child abandonment and institutionalization are also forms of violence, and children in institutions are thought to be particularly vulnerable. Research suggests that girls in care or detention are more likely than boys to become victims of sexual and physical abuse.

Kazakhstan has a relatively small number of orphans in care, but it was the last country in Central Asia to move towards a foster system, not yet implemented. Kazakhstan has a database of kids in care that helps with adoptions. There is an adoption consultation hotline and adoptive parent support groups in the major cities. Physical and sexual abuse in the Children's Homes is a big problem.

Tajikistan has a strong and conservative family-based culture. Like most of South Kyrgyzstan, most of the men are abroad in Russia working, and poverty is a problem. However, Tajikistan has implemented a pilot of transforming baby homes into family-support centers focused on training parents, keeping families together, and seeing kids in families. Thousands of kids are in the care of relatives or other informal foster arrangements.

Traditionally, extended families take care of kids. The more Islamic culture of Uzbekistan strongly values taking care of orphans. The government decided to develop and move to a foster system within the last two years and looks to be moving ahead full speed.

Kyrgyzstan is one of the poorest countries in Central Asia. Nearly 900,000 children in Kyrgyzstan live in poverty and continue to face deprivation. Many children are separated from their families and live in residential care institutions, being deprived of the care of their parents or close relatives. 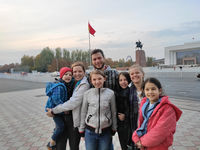 Some think we’re heroes, others that we’re fools

Anton Putilin is not your average 28-year-old. Husband, Father of 5 (including four adopted daughters), non-profit founder and now on the leadership team of Kyrgyzstan Without Orphans, Anton is a man on mission.
Read more

For three days in November, people from Uzbekistan, Tajikistan, Kazakhstan, and Kyrgyzstan all gathered around the importance topics of keeping kids in families and orphan care in Central Asia. Leaders gathered to share their experiences in the sector and to dream and plan future collaborations together.
Read more

Unfortunately in Kyrgyzstan, the prevailing "wisdom" is that most children with special needs belong in boarding schools. We have even heard a couple stories of the authorities threatening parents to take children into state custody for not putting their children in these special schools (The law protects against this, but many parents don't know that.)  While some of these schools might be decent places, many of these kids with special needs get lost in such a big, unpredictable, stressful environment.  Serious behavioral problems often develop.  For families from rural communities, the choice is often between giving the kid away to an institution or not giving the child any education.
Read more

Let the Foster and Adopted Children Come to Me

Krish Kandiah, Home for Good: "Families of vulnerable children often feel unwelcome in their own churches. Here are five ways to change that."
Read more

A Kyrgyzstan Without Orphans Story

The Spirit of God moved through a number of people in Kyrgyzstan for more than a decade before the official kick-off of the movement in 2013, when the first meeting of leaders came together in Bishkek.
Read more
1 - 5 of 22
1 2 3 4 5 Next
j
Sign in
You have unsaved data. If you leave this page now your changes may be lost.