For the past month, we have all watched in devastation as our brothers and sisters in Ukraine have faced daily violence and attacks from the Russian invasion. As many of you know, Ukraine was the birthplace of the World Without Orphans vision and is home to several of our team members, so seeing the suffering there has felt very personal.

Mariupol, a Ukrainian port city that most Westerners had never heard of a month ago, is now known worldwide as a war-ravaged place of immense suffering and widespread destruction. Our hearts break as, from a distance, we watch the decimation of this city and the people who call it home.

Karmen Friesen, principal coordinator of World Without Orphans remembers a different Mariupol than the one you see in ruins on the news. Like any city, it had its challenges and social problems, but God was moving there. In March 2009, while facilitating the Eastern European Summit on Orphans & the Church in Ukraine, Karmen had the opportunity to see firsthand the work that was being done to bring God's hope and healing to vulnerable children and youth in Mariupol. In a spot overlooking the Sea of Azov, he and others spent time in prayer for the people of the city, especially orphaned and at-risk children.

Over the years, God has worked through Christians in Mariupol as they have opened their churches and homes to children in need. These believers have impacted their nation and the world by spreading the message of God's call to care for vulnerable children in families.

One of our partners, Pastor Gennadiy, has been ministering to street children in the city of Mariupol for more than 20 years. An important part of his work has been a rehabilitation program to help them overcome drug addiction and trauma. As of 2016, more than 3,000 young people had gone through the program, and many have been placed in adoptive and foster families. Personally, Pastor Gennadiy and his wife have adopted 33 children and teens who used to live on the streets. 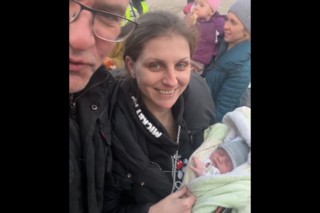 Now their city is under siege, and amid the danger, Pastor Gennadiy and his team have been courageously helping hundreds to evacuate. On March 17, he expressed his great joy when, "in the midst of sorrow and pain … the first hundred people [were taken] from the basement of our church … [and] through the Mariupol blockade. Thank you to everyone who is with us in this process!” One of those evacuated was a tiny baby, born on the eve of the Russian invasion. “The first three weeks of her earthly life she spent in the basement of our Mariupol church … We managed to get her through the Mariupol blockade, along with a hundred more mothers and children.”

According to Radio Free Europe, thousands of people have died in Mariupol and 90% of the city's residential buildings have been damaged or destroyed. Gennadiy told us, “Tomorrow [March 24] will be a month of the heroic defense of my city, Mariupol … About what is happening here, it is difficult to write and it is impossible to speak without [feeling] hysterical. I am proud of my team, which works daily on the very edge … supporting our soldiers, and helping to evacuate and provide for people under shelling … Every child, woman, [and] old man, taken out from under Russian bombs is a miracle. [On March 21] Two of the three buses that were going for people were shelled … but everyone is alive! The buses were destroyed … [but the] people are alive! Another batch of refugees [managed to] break through [the] Mariupol blockade.” We thank God for these miraculous evacuations!

As what is happening in Ukraine begins to take a back seat in our news broadcasts, our partners there ask that we continue to pray and do not forget them.

To provide critically-needed support to Pastor Gennadiy and our other Ukrainian ministry partners and staff, World Without Orphans has created a Ukraine Emergency Relief Fund. Your gift of any amount is deeply appreciated and will have even a greater impact because every dollar will be matched by other generous WWO donors.

Thank you for your continued prayers and support for the people of Ukraine.