The situation of children in South Asia
South Asia is home to about 627 million children under 18 years of age1 - approximately 36% of the total population of 1.82 billion.

Education
An estimated 11.3 million children of primary school age (5.8 million girls and 5.5 million boys), and 20.6 million children of lower-secondary school age (8.9 million girls and 11.6 million boys) in South Asia do not go to school. Only 69% of children have access to early childhood education in our region. And significantly, more girls than boys will never go to school in South Asia. This is leading to the highest incidents of child marriage and child labor in the world.

Children separated from their families
Do you have stats? Children can be separated from their families during a crisis. Children may also be inappropriately separated and placed in foster care or an institution, due to a perception of family need or sometimes for more illicit reasons. In an institution, the wellbeing of most children is most at risk with institutional care lacking the necessary stimulus for a child to thrive and if separated for more illicit reasons can be the subject of exploitation and abuse. Children may also be separated from their families for their own protection, such as in cases of domestic violence. Alternative care is a temporary service until a stable solution can be found for the child such as foster care or a residential setting. Any placement must be based on the principles of necessity – finding a solution so that the child remains with family; and, appropriateness – finding the best place to ensure the wellbeing of the concerned child.

Violence against children
Violence against children is widespread and pervasive and remains a harsh reality for millions of children in South Asia which has long-lasting consequences on their lives. Over 21 million children between 5-17 years of age are engaged in child labor in South Asia alone. Violence can be physical, sexual, and emotional and also manifest itself as neglect. It can occur in homes, schools, care and justice systems, workplaces, and communities. Perpetrators include parents, family members, teachers, caretakers, law enforcement authorities, and other children. Violence can be interpersonal and also a result of structures that allow or promote violent behavior.

The orphan situation is serious. Bangladesh is the most populated country by density in the world. The country has over 161 million people, with over 64 million children making up around 40 percent. Orphans and street children in Bangladesh are often thrown in jail for petty crimes or abused and subjected to the most atrocious violence; most orphanages are overcrowded and cannot take in these children.

Alternative care in India: Orphanages and small family-based styles of care were the only alternative care options available in the past, but the situation is slowly changing. India now has foster care, group foster homes and most recently India introduced domestic adoptions. Reunification of children with relatives is also taking place.

There are around 12.7 million children under the age of 18 in Nepal. In recent decades, the number of Nepali orphaned and abandoned children without parental care has increased or are at risk of losing such care. There are various reasons for this rise, including political unrest (particularly armed conflict), the high rate of poverty, and the spread of HIV/AIDS.

In Sri Lanka today, institutional care is the fate of many children who have been abandoned by their parents. According to UNICEF, out of over 21,000 children in orphanages in Sri Lanka, one or both parents of over 19,000 of them are still alive. There are currently 488 voluntary children’s homes in Sri Lanka. Living conditions for children in some of these homes are less than idyllic. 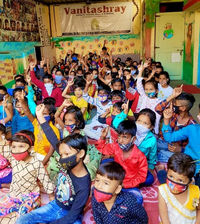 21 years ago, the ministry Vanitashray in Maharashtra, India began as a small children’s home for young girls, and since then transitioned to a day center which helps children remain with their families, and provides single mothers with skill training that enables them to provide for their children.
Read more

16- year-old Vijay* lives with his single father and seven other siblings in the nation of Sri Lanka. When the lockdowns due to COVID-19 began in Sri Lanka, Vijay’s father struggled in his role as a single parent. Keeping the children at home and managing the family during the many weeks of the imposed curfews was a daunting task. This overburdened father often lost his patience with his children and resorted to punishment to correct difficult behaviour. He wondered how he could continue to cope while he and the children were confined to their home.
Read more

“A Story a Day” keeps kids learning in India

WWO partner, Vanitashray, located in Pune, India launched a campaign- A Story a Day which supports learning for children from low-income backgrounds from across the country. By using simple English stories on video, the campaign is helping kids continue their education who are still out of school due to the pandemic.
Read more

When the COVID-19 pandemic began, the team with Bangladesh Without Orphans knew they needed to do something to help struggling families. After learning that the COVID-19 parenting tips were available in Bengali on WWO’s website, they quickly thought of creative ways to widely spread the critical information. Through online trainings and What’s App groups, Bangladesh Without Orphans has reached over 1,000 individuals with the parenting tips!
Read more

Pearl is using her giftings as a writer, producer and director to advocate for children in families in India, and her work is gaining national attention. A seed that was planted in Pearl’s heart at a small WWO gathering in India has grown into a nationwide media campaign in her nation that is impacting thousands and inspiring multitudes!
Read more
1 - 5 of 24
1 2 3 4 5 Next
j
Sign in
You have unsaved data. If you leave this page now your changes may be lost.