Europe is a continent of an estimated 741 million people. In Eastern Europe, residential care remains a common solution for orphans and vulnerable children. There are an estimated 7.3 million orphans living in Eastern Europe. Though Western Europe does not have the same challenges with residential care, the number of children in foster care or at risk of going into the system is significant. Europe still has the highest numbers of children separated from their families worldwide.

Europe Without Orphans works to:

The Republic of Belarus is a small former Soviet nation in Europe with a population just under 10 million. In 2008, Belarus was a nation that got hit pretty severely in the global economic crisis. Because of this economic downturn there are approximately 25,000 orphans in Belarus.

Latvia is a small country of only 2 million people, located in the Baltic region of Northern Europe. There are thousands of orphans living in Latvia. The children need more support than ever due to the social and economic upheaval. Latvia is among the poorest nations in the European Union, and the health care system is one of the worst in Europe. HIV/AIDS affects about 10,000 people in the country. Children under the age of 14 account for about 13.5% of the population in Latvia. Families are forced to move around due to economic stress, and children are left with people who cannot take care of them and ultimately end up in state-run institutions. The children then grow up and leave the institution unprepared for living on their own.

Romania is a located in South Eastern Europe and has a population of about 21.7 million people. There are about 100,000 orphans living in child protective services with more being abandoned each day.

Ukraine has a population of 43 million people, and 106,000 children live in boarding schools of various types (6,000 of whom are adoptable). Though in recent years Ukraine has made great strides in moving towards family care like foster care and adoption.

Our vision is – a home for every child who needs one. When Home for Good launched as a charity in 2014, there were 9,000 foster carers urgently needed and approximately 6,000 children waiting to be adopted – and approximately 15,000 evangelical churches in the UK!

A couple led to adopt four young children from a Ukrainian orphanage purchased a larger home in the suburbs of Kyiv, a house that would fit their entire family of 11. Two weeks later, their dreams would shatter when they realized that Russian troops were nearing their home.
Read more

Neglect, family separation, institutional living, failed reunification, foster care. Victor, Lev and Christina have walked a difficult road over the course of their young lives. The Ukrainian siblings were placed in an orphanage in 2019 as a result of their mother failing to provide safety and care.
Read more

Congratulations to our friends at Romania Without Orphans on their recent award and recognition for their tremendous advocacy that has created changes in laws that will help children gain families. On Wednesday, November 25, 2020, ARFO received the Gold Award distinction for the best lobby and advocacy campaign of the year. In awarding the distinction, the competition’s jury analyzed how RWO conducted the preliminary research, planned its actions, established its implementation strategies and tools as well as the capacity to evaluate the objectives. A significant point value was given to the creativity of the approach and the identification of new communication techniques. We thank God for this amazing team of advocates in Romania!
Read more

One Croatian couple on an important mission
Vlado and Marina Hoblaj have been serving vulnerable children since the early days of their marriage. Our World Without Orphans team first came in contact with Vlado and Marina in 2018 on a trip to Croatia. We were eager to learn of their experiences in their south eastern European context. Since attending the Global Forum in 2019 the Hoblaj’s have had renewed vision and purpose in their efforts to see the church active and engaged on behalf of children in need of foster or adoptive families.
Read more 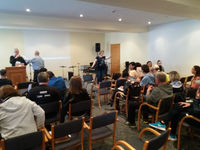 The European Facilitation Team of World Without Orphans hosted ‘Toward New Reality’, an online working conference designed to share new research and further equip leaders of ‘without orphan’ movements across Europe to build their national movements.
Read more
1 - 5 of 44
1 2 3 4 5 ... 9 Next
j
Sign in
You have unsaved data. If you leave this page now your changes may be lost.